Collaborative Robots are Breaking Down Industry Barriers – Here’s Why 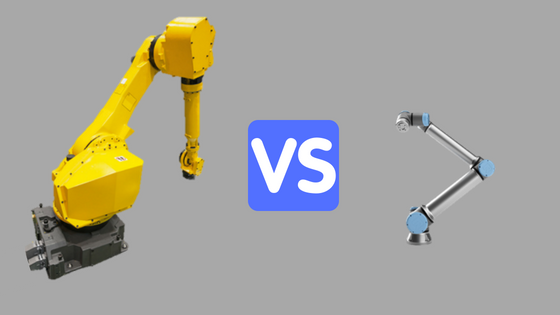 Collaborative Robots, you know the not so scary type, are breaking down industry barriers and becoming commonplace in factories that would have never expected to use a robotic arm, but why?

Robotic arms that industries are accustomed to are large, heavy, and move materials rapidly; they are intended for high volume manufacturing settings where space and capital budgets are not a limitation. Before the collaborative robot age, if your factory did not meet the this criteria, then robots were out of the question.

Collaborative Robots, specifically the “power and force limiting with inherent design and control” type per International Standard (ISO) 10218-1, are designed with safety mechanisms built into the robotic arm. This means that the robot can “sense” when it contacts a person and stops itself before causing pain or injury. Whether this smart robot feature is acceptable to prevent causing pain and how much pain is tolerable are two hotly debated topics in the standards committees… although the jury is still out, ISO/TS 15066 did release some research and guidance to complete a collaborative robot risk assessment (documentation that must be filled out for any application system design).

Why is this important? The work required to ensure that no person ever gets within a certain distance of a functional robot creates a considerable industry barrier in the way of cost and space, which is a significant reason Collaborative Robots have disrupted the industrial robot market.

In a typical industrial robotic application, the robot arm itself is 1/3 of the overall system cost with the other 2/3 made up of software, peripherals, and systems engineering. Collaborative robots, like Universal Robots, greatly reduce the latter 2/3 system cost with their ease of programming, removal of peripheral safety equipment, and minimal space requirement. What’s more is that a collaborative robot can be reprogrammed and deployed in less than an hour allowing industries with a wide range of parts or applications to redeploy the robot as demand dictates.

This means that a typical industrial robot system installation cost of $130,000 can be cut in half with a collaborative robot…. wait, there must be a catch?

Yes, there is! Collaborative Robots do not have the same speed and payload of their industrial robot counterparts. The UR10/UR10e is the largest collaborative robot currently made by Universal Robots with a payload of 10 Kg (22 lbs) and runs at a reduced speed to allow the safe stop condition. Besides weight and speed, a sharp piece of metal in a collaborative robot gripper is a cause for concern with additional guarding being a likely scenario to prevent injury.

The good news is that there are tons of applications that fit within this technology and an entirely new market is being developed – factories that did not have the capital, space, or expertise to install and maintain an industrial robotic arm can now install a collaborative robot arm at half the cost and redeploy the robot as required by business demands with return on investment (ROI) of typically less than 1 year!

Now that industry barriers have been slashed by collaborative robots with additional improvements in the pipeline and a proven market of over 24,000 robots being sold by Universal Robots, the robot industry giants are scrambling to catch up and launch their own collaborative robot lines.

This site uses Akismet to reduce spam. Learn how your comment data is processed.